The following game so beautifully annotated by Chernev in ‘The Most Instructive Games of Chess Ever Played’ shows the power of centralized knights and rooks on open files.Â

Nf6 2.c4 e6 3.Nc3 Bb4 4.Nf3 The Nimzo-Indian defense. 4…Bxc3+ 5.bxc3 d6 6.Qc2 Qe7 7.Ba3 c5 This fixes White’s pawn at c4, making it a stationary target at which Nimzowich can aim an attack. 8.g3 White prepares to fianchetto the bishop and control the long diagonal. Ordinarily, this is a comendable development, but here this has the drawback of depriving the weak pawn at c4 with a defender. [8.e4 A better course followed by 9.Bd3.] 8…b6

Black intends to dispute control of the long diagonal. 9.Bg2 Bb7 10.0-0 0-0 11.Nh4 White is anxious to exchange bishops, since Nimzowich has more scope, and bears down (together with the knight) so strongly on the e5 square. A better way to bring about the exchange would have been 11.Nd2. The knight would then not only exert more influence on the center, but would be a useful protector of the pawn on c4. 11…Bxg2 12.Kxg2Better would have been 12. Nxg2 retaking with the knight. 12…Qb7+ 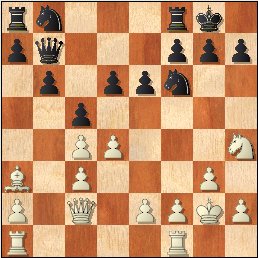 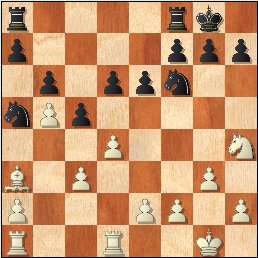 Â 17…Nc4! The doubled pawn has been dissolved, but the weakness of the square on which it stood remains. Nimzowich anchors his knight on this vital square, and with that move he secures new advantages: (1)The knight is posted aggressively. It attacks the bishop and drives it back to its original square. (2) The knight is posted defensively. It protects the d6 pawn and the b6 pawn against possible attack. (3) the knight has a great deal of influence on the important central squares. (4) The knight cannot be disloged by pawns, nor by the bishop (which operates on the dark squares only).18.Bc1 a6 This forces open the a file, since White must capture or lose a pawn.

A comparison of the positions shows the superiority of Black’s in that his knights are strongly centralized, and his rooks can operate on the two open files. White’s minor pieces are widely scattered, and his rooks out of touch with each other.